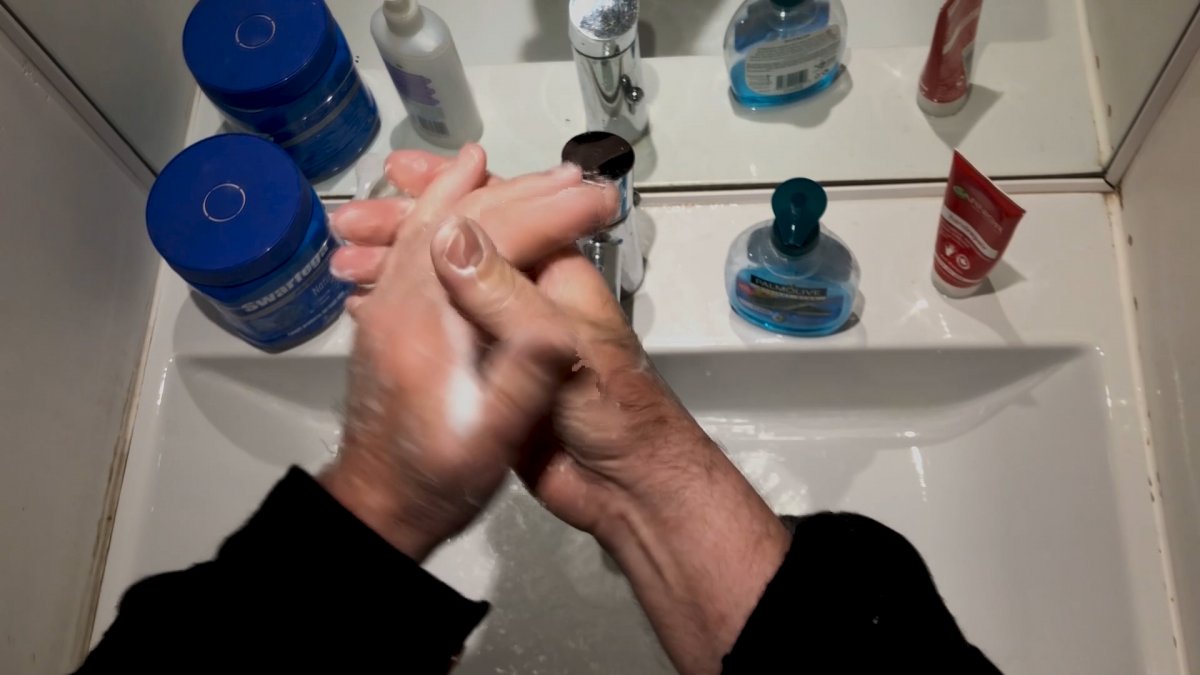 Directly following the screening there will be an introduction by Olympia Bukkakis.

Self-isolating at home during the COVID-19 lockdown, the artist follows the British government’s advice.

“Just when I thought I was up to speed with it all, I received an email from London’s Kate MacGarry Gallery, alerting me that a new video by the formidable John Smith was premiering on Instagram and would be available for one week. I clicked immediately. In the three-minute Twice (2020), Smith stands in front of a mirror, singing “Happy Birthday” in a minor key, like a funeral dirge, twice, as he washes his hands. Cut to Boris Johnson advising the public to contain the spread of coronavirus by doing exactly this—well, minus the minor key. Otherwise, the UK prime minister says, “for the vast majority of people in this country, we should be going about our business as usual.” Smith ends with a title card that twists the knife: “Made in London during the sixth week of the lockdown, when Britain’s COVID-19 related death toll reached 25,000.” With a tremendous economy of means, Smith marshals his dry humor in the service of outrage at the incompetence and cruelty of a Conservative government that has decimated the capacities of the NHS and other social services throughout a decade of austerity, now as ever ruling in the interests of the rich, the rest of the country—and particularly the most vulnerable—be damned. For Twice, so concise and timely, online exhibition was a perfect fit.” Erika Balsom, Art Agenda, 2020

John Smith was born in Walthamstow, London in 1952 and studied at North-East London Polytechnic and the Royal College of Art, after which he became an active member of the London Filmmakers Co-op. Inspired in his formative years by conceptual art and structural film, but also fascinated by the immersive power of narrative and the spoken word, he has developed an extensive body of work that subverts the perceived boundaries between documentary and fiction, representation and abstraction. Often rooted in everyday life, his meticulously crafted films playfully explore and expose the language of cinema. Since 1972 Smith has made over sixty film, video, and installation works that have been shown in independent cinemas, art galleries, and on television around the world and awarded major prizes at many international film festivals. He received a Paul Hamlyn Foundation Award for Artists in 2011, and in 2013 he was the winner of Film London’s Jarman Award.